On the night that he was betrayed, our Lord Jesus Christ took bread; and when he had given thanks, he broke it*…

And so when we celebrate Holy Communion, to this day, the celebrant breaks the bread.  The question we’re looking at in this entry in the walk-through of the Communion liturgy is when to break the bread.  The rubrics in the 2019 BCP, immediately above the words of institution in the prayer of consecration (pages 116 and 133) read thus:

This is very nearly the only rubric in the prayer book tradition that tells the priest or bishop what to do with his hands during the prayers.  The Roman Rite is very specific – when to elevate, how many signs of the cross to make – but ours is very simple and free.  But the celebrant must touch the bread or the paten, and each vessel with wine to be consecrated.  This is as far as we go (at least officially) regarding the idea of “sacramental intent” – the notion that the priest only consecrates what he intends to consecrate, and nothing by mistake.  Physically indicating that which is to be consecrated for the Holy Communion is thus both an imitation of our Lord’s “taking” before blessing and breaking, as well as an act of verification regarding exactly what is about to be consecrated.

I have seen Anglican celebrations even by bishop where these rubrics have been ignored… please be sure you heed them!

But what’s interesting here for the 2019 Prayer Book is that it says the bread may be broken during the words of institution.  Those who are used to the 1979 Prayer Book’s liturgy may be surprised – there is a distinct “Fraction” or “Breaking of the Bread” soon after the prayer of consecration.  But the classical Anglican pattern is actually to break the bread during the words of institution.  In our new prayer book we have the choice of doing the fraction at this point or as a special act after the prayers of consecration and Lord’s Prayer.  This is what it looks like: 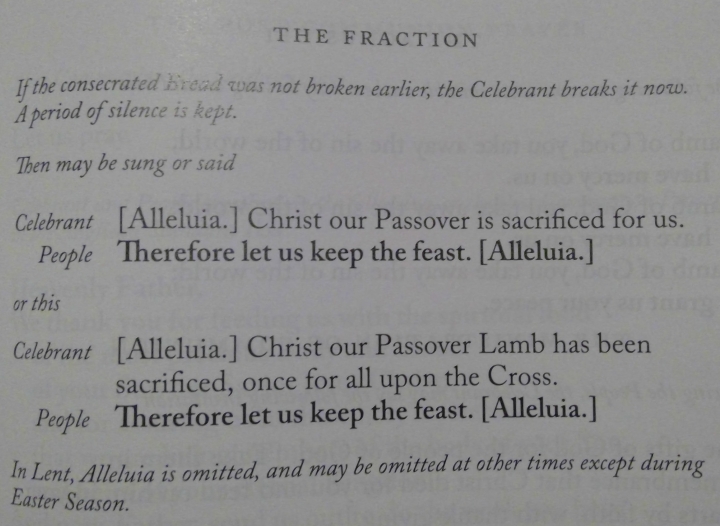 This is much like what is found in the 1979 Prayer Book and the modern Roman Rite, with the one difference being that instead of the traditional wording of the Pascha nostrum (“[Christ] our passover”) the celebrant can say another version of it.  Why two versions?

That both are presented as acceptable options here indicate that insofar a present sacrifice can be inferred in the celebration of Holy Communion, it is one that is communicative of the one sacrifice of Christ on the Cross, and not a repeat or addition thereto.  As Anglicans we can speak of a participation in the Holy Communion with Christ’s once-for-all sacrifice, even those of the “lower” Reformed stripe.

If your practice is to make the Fraction at this point, and use these two dialogues, consider using the first one most of the year and the second one during Lent and other occasions where the centrality of the Cross is made more explicit.

Anyway, back to the big question of the day: when should we break the bread?  And why do we have choices?

Option 1: Break the Bread during the Prayers

This is the theological preference of the Calvinists and (I presume) Zwinglians.  By breaking the bread at this point it emphasizes our remembrance of the Last Supper and de-emphasizes any notion of eucharistic sacrifice or offering.  Because most Anglicans-in-exile under Queen Mary’s reign spent their time with French Calvinists, the Elizabethan settlement saw the fraction enshrined in the same place in the liturgy.  So we have this as the standard pattern for every Book of Common Prayer with the probable exception of the original (1549) which doesn’t seem to specify.  Anglican precedent, therefore, pushes us firmly in this direction.  However…

Option 2: Break the Bread after the Prayers

That nice ritual breaking of the bread after the prayers is more historic, being the universal order before the Reformation.  The Lutherans retained it, too, likely due to their higher sacramentology compared to the Calvinists, et al.  And they rejected the Roman notion of eucharistic sacrifice as much as the rest of us, so that ought to assuage those who fear this form of the fraction is too “papist.”  To break the bread at this point, then, is to realign our liturgy with the greater ecumenical and historic consensus.  This is also in the “biblical” order.  Notice what we read: Jesus “took bread; and when he had given thanks, he broke it.”  The sequence is taking, praying, and breaking.  So why should we not let the priest finish “giving thanks” before breaking the bread?

Please Not Option 3: a bit of both

One practice I’ve come across (which seems quite common in my experience, though I haven’t traveled much) is for the celebrant to “snap” the bread during the words of institution without actually breaking it.  This, ideally, adds a dramatic effect in the midst of the prayers.  On my first celebration of the eucharist as a newly-ordained priest, I had perfect beginner’s luck and did this perfectly without breaking the bread on my first Sunday.  It took weeks to replicate that success.  But after a couple years I learned more about the theological reasons for the two different placements of the Fraction.  And so I took the advice given me: choose one point or the other.  People know what breaking bread is, means, and sounds like – you don’t have to pretend to demonstrate it for them, it doesn’t make things more dramatic or meaningful.

3 thoughts on “The Fraction: when to break the bread”