From the traditional calendar to the modern, the Epiphany season is the one that probably has undergone the largest transformation.  Although the majority of us are using the modern calendar, it’s helpful sometimes to look at how things used to be.  It may be that some echoes can be found of the old in the new. 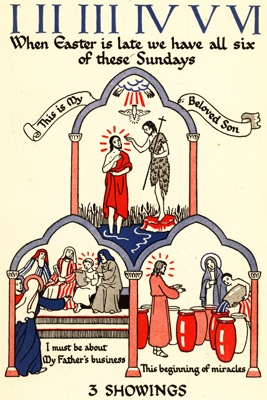 After the three-fold Epiphany Day followed a series of Sundays each with their own epiphany, or showing, of Jesus to be God.

There were fewer Epiphany Sundays in the old calendar because there was a three-week transition period between Epiphanytide and Lent… we’ll explore that when we get there.  Suffice it to observe here that the theme of the Epiphany – revealing Jesus to be God – continues for three to six weeks after the Epiphany Day itself.  Although the modern calendar does not intentionally pursue this theme in its lectionary, it is still a theme that preacher and reader alike can watch for throughout this season of the church year, allowing the “principle feast” of the Epiphany to light our way through this section of the calendar before moving on to the penitential pastures of Lent.

If you have a regular weekday Communion service, pulling up these traditional Epiphany Sundays might be a great idea.  With the exception of the 2nd Sunday this year (Year C of the 3-year cycle), there’ll be no overlap between the old and new at all.

6 thoughts on “The Epiphany Season (Traditional)”